For my Magazine I chose the theme Fitness, however Fashion Photography is my preffered subject and I always come across photo shoots in magazines that promote Fashion, but fitness at the same time. With the model posing fitness like poses to promose that fitness is beauty. As I love Fashion Photography  I thought I'd give it a go and loved it. I focused mainly on the different fitness poses in my images and dressed my model in suitable atire to mix the two successfully. I chose to do my images in black and white as I personally feel that it gives a stonger depth and contrast to my images and a more personal touch If the shoot was primerily Fashion based I would have used colour. I feel my images could be found in a magazine such as Closer or Now in the fitness blog section or in a purely fitness magazine suchas Fitness or Zest. I took a whole shoot and picked 6 which I felt where best. 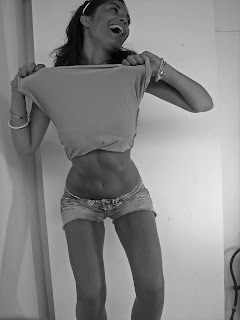 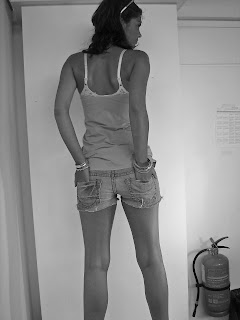 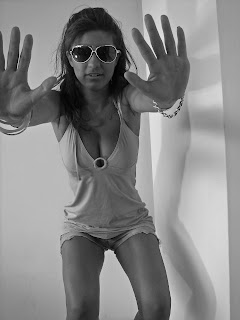 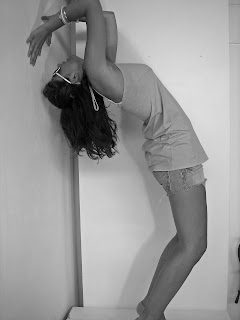 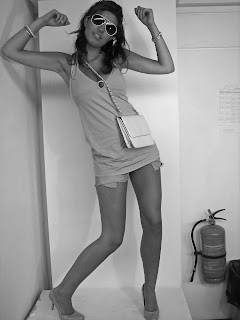 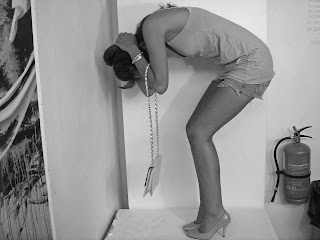 "The Gymnopédies, published in Paris starting in 1888, are three piano compositions written by French composer and pianist Erik Satie."
"These short, atmospheric pieces are written in 3/4 time, with each sharing a common theme and structure. Collectively, the Gymnopédies are regarded as the precursors to modern ambient music - gentle yet somewhat eccentric pieces which, when composed, defied the classical tradition. For instance, the first few bars of Gymnopédie No. 1 consist of an alternating progression of two major seventh chords, the first on the subdominant, G, and the second on the tonic, D. This kind of harmony was almost entirely unknown at this time. The melodies of the pieces use deliberate, but mild, dissonances against the harmony, producing a piquant, melancholy effect that matches the performance instructions, which are to play each piece" "slowly", "dolorously" or "gravely".
"From the second half of the 20th century on, the Gymnopédies were often erroneously described as part of Satie's body of furniture music,  perhaps due to John Cage's interpretation of them."
Reference: (2011) Gymnopedies [Online] Available at: http://en.wikipedia.org/wiki/Gymnop%C3%A9dies_(Satie) [Accessed on 20th March 2011]
Posted by Bella at 07:05 1 comment:

"By 1910, plague had circled the globe and established itself in rodent populations on all inhabited continents other than Australia. After 1920, however, the spread of plague was largely halted by international regulations that mandated control of rats in harbors and inspection and rat-proofing of ships. Before the third pandemic subsided, it resulted in an estimated 26 million plague cases and more than 12 million deaths, the vast majority in India. By 1950, plague outbreaks around the world had become isolated, sporadic, and manageable with modern techniques of surveillance, flea and rat control, and antimicrobial treatment of patients. From 1969 through 1993, a median of 1356 human plague cases were reported annually to the World Health Organization, with around 10 to 15 countries reporting cases each year. Plague has practically disappeared from cities and now occurs mostly in rural and semirural areas, where it is maintained in wild rodents. In the United States, the last outbreak of urban plague occurred in Los Angeles in 1924 and 1925, and human cases since then have resulted from zoonotic exposures in rural areas of western states."
"Plague, because of its pandemic history, remains one of three quarantinable diseases subject to international health regulations (the other two being cholera and yellow fever). The alarm that plague is still able to evoke was highlighted by the public panic over and exaggerated international response to reports of outbreaks of bubonic and pneumonic plague in India in 1994."

Reference: History of Plague [Online] Accessed at: http://www.manbir-online.com/diseases/plagur-history.htm [Accessed on 6th March 20011)
Posted by Bella at 06:55 No comments:

"At the end of WWI, there was much political instability because of the revolutions throughout Germany"
"Germany was really divided politically, socially, and economically. International Context With all the war debts, Germany had so many problems with so many countries, they had no help for  themselves."
"Economic à Extreme inflation led people to blame others and do whatever they had to in order to eat.

"The Struggle for the Ruhr: France occupied the Ruhr Basin because they felt Germany was not obeying the treaty"
"Contracts and Agreements: Countries formed agreements with each other. Lost 13.1% of its territory and 10% of its population"
"These territories were rich in agricultural and mineral resources"
"Loss of Alsace-Lorrain and half of Upper Silesia disrupted some of the most important industrial and transportation systems"
"Allies had the right to confiscate all German private property in their countries. Foodstuffs had to be imported"
"Minerals previously mined in Germany now had to be imported"
"No longer export raw materials"
"Loss of their merchant fleet deprived Germany of foreign exchange that other countries paid them for their fleet services"
"Loss of the land (money) abroad decreased their profit and interest payments May, 1921"
"Called the “ultimatum” because unless Germany accepted this plan within 6 days, the Ruhr Basin would be occupied."
"This was the final payments plan which totaled war reparations at 132 billion gold marks"
"This was 3 times what Germany was capable of paying"

"Counter Revolutionàpolitical instability led people to riot and use violence as a means of control and power§Treaty of Versailles: gave Germany the sole responsibility for the war guilt and reparations"
Reference: Hyperinflation (2000) [Online] Available at: <www41.homepage.villanova.edu/.../Inflation%20in%20Germany%201923. ppt> [Accessed on: 13 February 2011]
Posted by Bella at 10:03 1 comment:

Political and Cultural Influences on Surrealism

"One of the influences on the development of the artistic movement known as surrealism derived from the writings and thought of Sigmund Freud. Freud has a particular influence on Andre Breton, one of the leading theorists of the movement, and Salvador Dali, perhaps its best-known practitioner. Each man acknowledged the contribution of Freud and produced works citing Freud directly. Surrealism was an artistic movement with a strong political component. It was the most highly organized and tightly controlled artistic movement in this century, and its moral and philosophical leader was Andre Breton, who held the unofficial title of the Pope of Surrealism. Surrealism was also a life-style and a philosophical outlook that informed artistic expression, political action, and social life: "
"At the heart of Surrealism lay the belief that "objective chance"--by which was meant inexplicable coincidence--is central to reality, which is not an orderly system of events apprehensible by logical thought. Hence, it was believed, knowledge of true reality can be gained only through a-logical insights of the unconscious mind and these insights can only be achieved by certain (a-logical) automatic procedures (Osborne 529). "
"Surrealism did not involve on specific style but several styles, all based on the same basic tenets. Breton always remained the chief theorist of the movement, writing Surrealist manifestos and various works explaining and promoting Surrealist ideas. "
Reference: Influence of Freud on Surrealism (2007) [Online] Available at: http://www.lotsofessays.com/viewpaper/1702279.html [Accessed on: 12th march 2011].

"Surrealism is a movement in literature and art whose effective life is generally assigned the years 1924-1945 by historians. In 1924, André Breton's first Manifesto of Surrealism appeared, defining the movement in philosophical and psychological terms. Its immediate predecessor was Dada, whose nihilistic reaction to rationalism and the reigning "morality" that produced World War I cleared the way for Surrealism's positive message. (Other precursors and influences are listed below.)"
"Surrealism is often characterized only by its use of unusual, sometimes startling juxtapositions, by which it sought to trancend logic and habitual thinking to reveal deeper levels of meaning and unconscious associations. Thus it was instrumental in promoting Freudian and Jungian conceptions of the unconscious mind."
"Throughout the 1920s and '30s, the movement flourished and spread from its center in Paris to other countries. Breton controlled the group rather autocratically, annointing new members and expelling those with whom he disagreed, in an effort to maintain focus on what he conceived as the essential principals or the fundamental insight which Surrealism manifested (a conception which changed, to some extent, during his life)."
"In the early '30s the group published a periodical entitled Surrealism at the Service of the Revolution (Le Surrealisme au service de la revolution, 1930-33). Communism appealed to many intellectuals at this time and the movement flirted briefly with Moscow; but the Soviets demanded full allegiance and the subordination of art to the purposes of "the State." The surrealists sought absolute freedom and their aim was a profound psychological or spiritual revolution, not an attempt to change society on a merely political or economic level. (The full history of surrealist political involvement is quite complex and led to dissent and the formation of various factions within the movement.)"
"With the advent of World War II, many of the Parisian participants sought safety in New York, leaving Paris to the Existentialists. By the war's end in 1945, Abstract Expressionism had superseded Surrealism as the western world's most important active art movement. "Ab Ex" grew out of both the tradition of Abstraction (exemplified by Kandinsky) and the "automatic" branch of Surrealism (exemplified by Joan Miro and André Masson) with Roberto Matta and Arshile Gorky as key pivotal figures."
"But Surrealism did not die in 1945. Though the attention of the fickle art world may have shifted away, Breton continued to expound his vision until his death in 1966, and many others have continued to produce works in the surrealist spirit to the present day. The ongoing impact of Surrealism cannot be underestimated and must be granted a distinct place in the history of literature, art and philosophy."
Reference: Surrealist Writers (1996-2011) [Online] Available at http://alangullette.com/lit/surreal/ [Accessed on 1st March 2011]

"Drawing on literary, art historical and historical studies, this essay collection explores the complex encounter between culture and politics within Surrealism. The Surrealist movement was one of the first cultural movements to question explicitly the relation between culture and politics, and its attempt to fuse social and cultural revolution has been a critical factor in shaping our sense of modernity; yet few books have been published that directly address this aspect of the movement. Although the historical importance of Surrealism is beyond doubt, politics plays an ambiguous role in the movement: it indisputably pervades the work, informing its endeavours, yet it seems to evade direct articulation. This anthology addresses not only the contested ground between culture and politics within surrealism itself, and within the subsequent historical accounts of the movement, but also the broader implications of this encounter on our own sense of modernity. Its goal is to delineate the role of radical politics in shaping the historical trajectory of Surrealism by drawing on the new perspectives provided by the latest considerations of social history, gender studies and postcolonial or race studies--approaches further modulated by the theoretical, methodological and disciplinary focuses of each contributor. This approach reveals new dimensions in the work of central figures like André Breton, Joan Miró, Salvador Dalí and Hans Bellmer, the Surrealists' involvement in the politics of race and anti-colonialism, their relation to communism and anarchism, and the role of exhibitions as a site of political struggle. The volume illuminates how Surrealism played a contentious yet integral role to the development of contemporary French thought, and how it forms the background to current intellectual debates through its contribution to recent French theory. The volume represents an important contribution to the fields of cultural history, literary studies, art history and cultural theory."
Reference: Surrealism Policials and Culture [Online] Available at: http://www.litencyc.com/php/adpage.php?id=2987 [Accessed on 2nd March 2011]
Posted by Bella at 02:05 2 comments: